In recent years, Chelsea have been notorious for swapping managers regularly, going through eight different coaches in the past eight years!

Following the latest appointment of Maurizio Sarri, an ex-bank clerk, many believed that his days were numbered as his previous managerial history left a lot to be desired for Chelsea fans.

In his most recent gig, Sarri lead Napoli to two second place finishes in three seasons, both times being tipped by Juventus. In his last season in Naples, Sarri pushed Juve all the way, finishing four points behind the champions while setting a team record of eight consecutive league victories along the way. 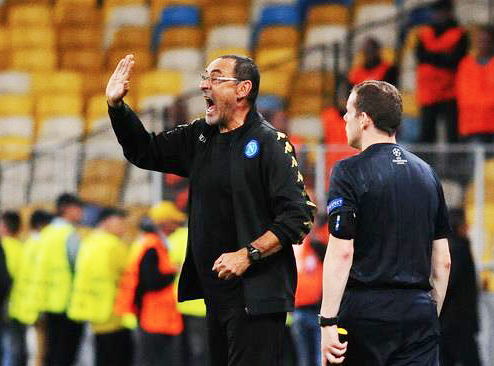 Despite mounting a serious title challenge in Italy, Chelsea fans were suspicious of Roman Abramovich’s appointment in light of Sarri being ‘trophyless’ in his 30-year managerial career.

However, with the 2018/19 season coming to a close, let’s review how the Italian has adapted to life in West London.

After being appointed as Chelsea Manager on July 14th, 2018, Sarri only had 25 days to prepare before taking on the record breaking Premier League champions, Manchester City in the Community Shield.

Sarri spent over a hundred million pounds in attempt to implement his style, bringing Jorginho along with him from Napoli as well as the additions of Kepa Arrizabalaga, Rob Green and Mateo Kovacic.

In his opener against the Centurions, Sarri’s Chelsea lost a respectable 0-2 at Wembley. Despite the result, there were many positives for the Blues, most notably being youngster, Callum Hudson-Odoi who impressed immensely, playing directly up against one of the world’s best full backs, Kyle Walker.

This confident performance form Hudson-Odoi foreshadowed the tremendous breakthrough season for the youngster!

From Game week 26 to 31, Sarri’s Chelsea remained in sixth spot, with a top four looking ever so bleak.

In March, the Blues were facing the reality of missing out on Champions League football for yet another season, bar lifting the Europa League in Baku.

In the final seven league fixtures, Chelsea’s only defeat came to runners up, Liverpool. The form that Sarri’s men showed at the business end of the season was vital in securing third place, their first top three finish in the league since winning the league in 2017.

In the 2018/19 top six ‘mini league’, Chelsea levelled with Arsenal on points in 3rd place.

Their most notable win this season came against the champions, City where Sarri gave Guardiola his first league defeat of the 2018/19 season. In the 2-0 home victory, Sarri made a big statement, showing that he can compete on a tactical level with other elite managers in the Premier League.

Chelsea’s second chance at silverware came again at Wembley, this time in the Carabao Cup. Chelsea beat both Liverpool and Spurs on route to the final, setting up another tie at Wembley against City.

Two weeks prior to the final, Chelsea lost 0-6 at the Etihad. In light of this, everyone including some of their own fans wrote off Chelsea, expecting another comfortable City win.

However, Sarri’s conservative tactics to this game included playing Eden Hazard as a false nine. This approach paid dividends as Chelsea took City all the way to penalties, denying their forceful attack for a long 120 minutes.

Despite not winning the final, many applauded Chelsea’s performance in light of the capabilities of this City team.

Sarri has also been successful in the Europa League for Chelsea this season. Last week, their victory at Frankfurt on penalties assured that they will meet Arsenal in the final, setting up an all London affair.

With Chelsea having another cup final to look forward to in the Europa League, can it be third time lucky for Sarri at Chelsea?

In the process of reaching multiple finals and securing Chelsea’s position in the Champions League next season, Sarri has also implemented his own, attractive philosophy of football in West London.

Despite some critiquing Sarri’s approach as ‘conservative’ and ‘boring’, football purists can appreciate the level of skill and patience it takes for Chelsea to play this way while reaching major finals.

This season, Sarri has gave Chelsea a foundation to build upon for the future, hoping to restore the Premier League and Champions League titles back to West London in future years.

Sarri will hope to top off his first season at Chelsea with a win in Baku, will the Europa League be Sarri’s first taste of managerial silverware?

View all posts by butterworthmatt