Why Q School prepares amateurs for the main tour. An exclusive interview with Joe O’Connor.

Have you ever dreamed about being a professional Snooker player? Do you think that you have what it takes? If so, chalk up and enrol for Q School!

There has never been a better time to be on the professional circuit with 20 ranking events per season, illustrious prize pools and televised coverage of all events.

What is Q school I hear you ask?

Labelled as an ‘amateur snooker competition’, Q school grants players equal opportunity to pay a fixed entry fee for their spot at a series of play-offs, all in aim to secure a tour card. The format means that every player who makes it to the quarter-finals of the play-offs, automatically qualifies for a place on the circuit.

One player that has had his fair share of experience within Q school and has just finished his maiden season on the main tour is Professional Snooker player, Joe O’Connor. We (@TheWhyInSport), had the pleasure of interviewing O’Connor after a tremendous breakthrough season. 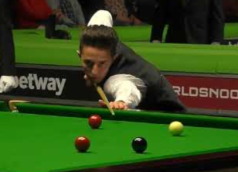 O’Connor was highly supportive of Q school, stressing that “You can test yourself against the other amateurs, seeing if you have the ability to turn pro… giving everyone a chance”.

When faced with the question, why does Q school prepare amateurs for the main tour, O’Connor said that It gives opportunity to “play all of the top players” as an amateur, making “the standard not as new” when finally turning pro.

Despite partaking in Q school numerous times, O’Connor gained his pro status through different means of qualification. O’Connor qualified through the EBSA Amateur Play Offs where he was required to win two best of seven matches to gain access to the main tour.

After progressing through the EBSA and being granted a tour card, O’Connor was “invited to pretty much every event for two years” enabling himself to qualify for numerous tournaments on the circuit. Recognisable names on the tour such as Elliot Slessor and Sanderson Lam have been through this process prior to O’Connor.

In the ranking event where he made his debut against a pro, O’Connor was thrown in the deep end, drawing Neil Robertson in the first round of the 2014 UK Championship. After defeat, O’Connor went on to say that Robertson was one of the toughest opponents he has faced because of the fact “I wasn’t pro at the time”.

Partaking in amateur events such as Q school and the EBSA has gave O’Connor the chance to analyse his game against seasoned players, improving future performances. It has since become evident that O’Connor has learned from these defeats as two years on from his debut in the UK Championship, he made it to the third round in York, beating Ryan Day on route.

Despite being a wonderful cueist, O’Connor doesn’t believe that the strongest attribute of his game is a technical factor, instead his “temperament” by not “letting much affect me”.

O’Connor stressed the importance of giving the same attention to each shot, not letting what is happening on the table affect your mind set. When questioned why it’s important for players to have a good mentality, O’Connor said that “you have to forget what happens, you can only focus on your next shot”.

“You just have to believe in yourself, everyone on the tour can clear up in one visit, it’s just about doing it at the right time”.

After a successful first season on the main tour, O’Connor said that he “just wanted to keep going, I didn’t want the season to end!” This mentality and hunger will be crucial if O’Connor is to follow in his local idols footsteps, Mark Selby, one day becoming World Champion.

Hopefully, Q school and the EBSA will encourage more players like O’Connor to enter these qualification processes, continuously growing the sport across the UK.

Just how high of a level do you think Joe O’Connor can reach?