Raheem Sterling has said he is no longer bothered about the media “picking on him” after they perceived him to love “bling”.

Sterling, 23, has often found himself at the centre of attention and in the firing line of the media throughout his career. 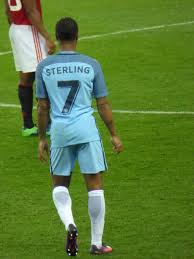 The most recent occasion is when he had his new tattoo of a gun on his leg on show and the media took the opportunity to stir the pot and target him. This brought up a media war as many people and professionals defended the young Manchester City winger as the tattoo was meant to remember his father, who was shot when Sterling was younger.

The media is now claiming he loves “bling” after treating his mother and buying her a house. Sterling followed this by saying “Fifteen years ago, we were cleaning toilets and getting breakfast out of a vending machine” as he was growing up in London with his mother and sister.

But why should the media be supporting Sterling rather than targeting him?

At the age of only 23 he has already shown himself as a proven goal-scoring, title winning winger.

When he joined Liverpool, from QPR, in 2010 he went on to score 18 goals in 95 appearances and caught the eyes of many football fans, managers and pundits with his pace and ability to skip past players.

Sterling is also playing for England and is currently representing them for the second time at the World Cup.

He made his first England appearance at the age of 17, with his first game at Wembley, against Denmark in 2014, being his most special and memorable.

Many pundits and managers see Sterling as a very useful player to have playing for club and country. The targeting he gets is surely unfair on a young, talented, English player who could have a bright career in the Premier League and possibly international level.

Top pundits, like Thierry Henry and Graeme Sounness, have said:

“I think he has developed so well and he has become a very important player for Manchester City.”

“Because of his bravery, his directness, pace and his technique he gets into the right position time and time again and he will get chances every game he plays.”

Do you think Sterling should be supported more in the media?